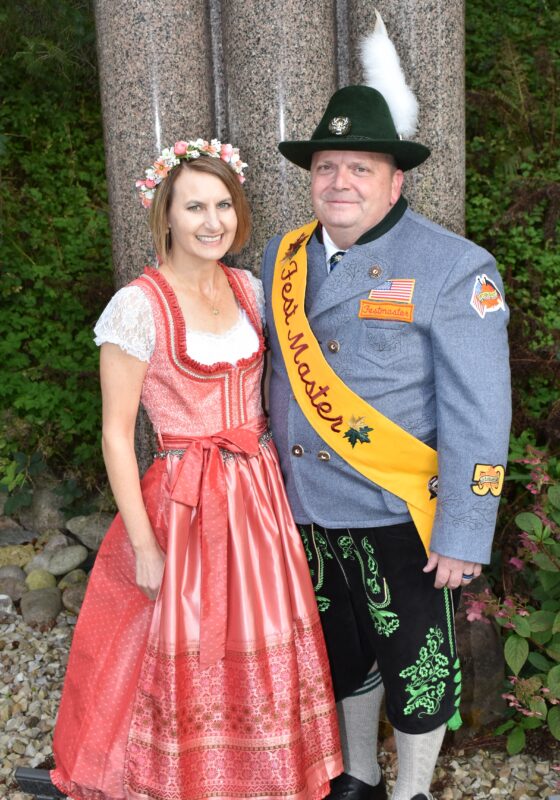 This Festmaster and Frau were born and raised in our very own La Crosse, WI!  They have several things in common, both personally and professionally.  They are both the youngest of large families, and they both attended the University of Wisconsin-La Crosse prior to attending the University of Wisconsin – Madison School of Veterinary Medicine.  For those familiar with our lovely area, though, that’s where the similarities end.  Our Festmaster was a South Sider, involved at the YMCA, and attended Blessed Sacrament and Aquinas High School.  Our Frau was a North Sider, involved at the Boys and Girls Club, and attended St. James and Logan High School.  They have two wonderful children who are both off to college – Zachary and Madison.

Doug held several jobs as a youngster, and even started a few businesses.  You name it and he probably did it, including piloting houseboats, teaching SCUBA and swim lessons, selling sound equipment, and giving brewery tours.  There was even a stint working for the Mouse in Orlando. He volunteered for La Crosse Area Underwater Rescue and Recovery Unit throughout his undergraduate years, before heading off to Veterinary School in Madison.

These days, you can most likely find Doug (and probably Kim) at Central Animal Hospital any day of the week.  Sure, being open to serve pets in the community on Sundays takes some sacrifice, but the need is great.  The best part is, Doug truly is in the best profession – he absolutely loves his work.   In addition to patient care, he has clinic-owning duties and a lot of philanthropic work.  He has donated veterinary services to many organizations in the past, but the most high-profile VIPs now are our state and local police K9 officers.  Doug started a medical wellness program for all the K9s in the Wisconsin State Patrol over a decade ago. When he learned that these officers weren’t all afforded the same, high level of preventative, medical, and surgical care, the team stepped up. Others have come along since then, with the Central Animal Hospital staff providing care for the Onalaska, Holmen, Tomah, and Campbell Police Departments as well as the La Crosse County Sheriff’s office.  Doug and his Frau are extremely blessed to be able to give back and provide everything these VIP K9s need.

Who will represent La Crosse as the 2023 Festmaster?

The new Festmaster & Frau are announced at the Festmaster’s Ball, held yearly in September.

Nominations for the 2023 Festmaster are now being accepted and will close on January 2, 2023!

If you know a man who is deserving, involved, and would be a great fit in our community-focused organization, submit your nomination below!

Nominations will be accepted for a man who is…

The following information is required to complete the nomination:

The final selection is made by the Board of Trustees however all nominations are kept on file for three years from the date of submission.