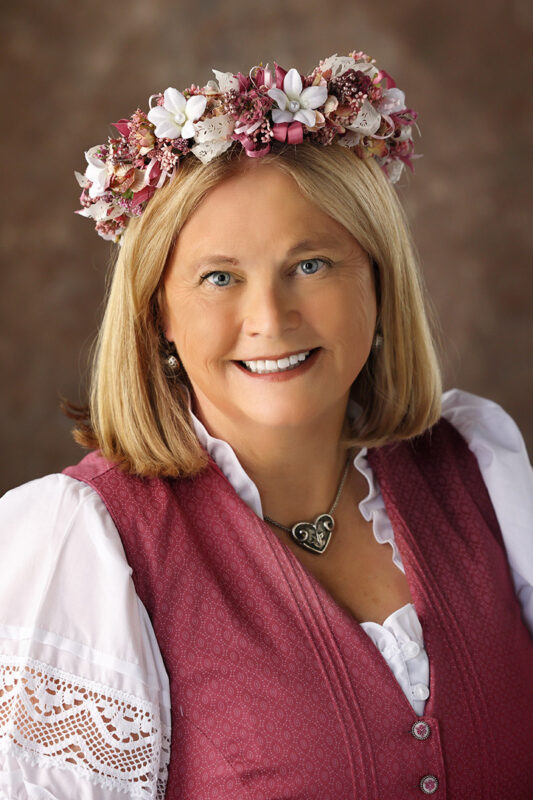 Photo courtesy of The Studio
Article by Brad Quarberg

For Sandy Cleary, the family tie to La Crosse’s Oktoberfest is strong.

Her grandfather, Roy Kumm, was one of the four main founders of the city’s festival and served as Festmaster in 1964.

Her father and mother, Russell and Gail Cleary, served on the Oktoberfest Board of Directors in the late ’70s and ’80s. They were named Festmaster and Frau in 1989.

More than three decades later, the family’s tie to Oktoberfest continues to grow as Sandy Cleary is the 2022 Mrs. Oktoberfest. Cleary was announced as the second-to-the-last member of the 2022 Royal Family during a reception Saturday, Sept. 24, at UW-La Crosse. The festival’s Festmaster will be announced Wednesday evening.

The longtime Cleary Management executive vice president was told of the honor during “coffee” with two former Mrs. Oktoberfests, and her mother.

“I am very honored to be part of an amazing group of women,” says Cleary. “They come from so many different walks of life, yet they have a common thread of giving to our community. I hope to carry on that tradition.”

While serving as a royal family member will be new to Cleary, she’s definitely not new to the 61-year-old celebration.

In her early years she accompanied her grandparents, Roy and Hope Kumm, to past festivals. She spent many hours checking out the rides at the grounds while her parents served on the Board of Directors and worked on the festival grounds.

As a band member at Central High School, the UWL Marching Chiefs and UWL Alumni Band, Cleary marched in the Maple Leaf Parade many times — and even played in the beer hall.

As a young adult, she enjoyed the music and beer halls with friends. She started volunteering for the fest in her 20s, selling buttons and serving as chair of the button committee.

Cleary drove her grandmother and 1964 Frau, Hope Kumm, in a convertible in parades. But it was as a member of the Oktoberfest Board of Directors for six years starting in 2000 that she really got to know how much work and long hours were involved to make the fest possible.

“I shoveled bark in the planters, tended bar, sold beer tickets and hauled trash,” she recalls.

After her two, three-year terms on the board, Cleary continued to chair the “Festland” history exhibit during the fest for many years. During that time, she was also raising two children and continuing the many traditions of Oktoberfest with them. She visited their schools with her mom and members of the royal family.

The experiences gave her lasting impressions on the importance of community involvement and teamwork.

It was during the early years of her career in accounting after graduating from the College of St. Thomas that Cleary focused on learning more about every aspect of running a business. As her professional work flourished, she focused on building something to be proud of, along with preserving historic buildings for future generations.

Cleary has taken that drive to serve as a commissioner on the City of La Crosse Parks Board. It’s key to improve and maintain the city’s beautiful parks for now and for future generations, she says.

She has been deeply involved in the community where she grew up. Cleary has served on numerous boards of directors, as well had been involved in a variety of major fundraisers, ranging from the Coulee Region Humane Society to the Boys and Girls Club.

Cleary has taken two important aspects of her career and community service to come up with her theme for the year: “Unity in community” and “Teamwork.” She says the two-folded message is seen in the design of her button she will hand out to thousands of festgoers.

Cleary recalls her father clarifying the history of Oktoberfest. He said, “The simple truth is Oktoberfest was not founded by any one single individual. Rather, it was created out of the collective efforts of thousands of individuals, companies and other organizations. They continued working year after year to make Oktoberfest a successful community event.”

Cleary says she has been lucky to be surrounded by biological and “fest” family as role models who have pulled together for great causes for more than 60 years in the Coulee Region.

The lifelong horse lover knew the design also had to have horses on her colorful button.

“Horses are amazing creatures as they are kind, strong and have the biggest hearts,” she says. “Winston Churchill said, ‘The outside of a horse is good for the inside of a man.’ That pretty much says it all.”

Who will represent La Crosse as Mrs. Oktoberfest?

The requirements for a nominee should be a person who:

The deadline for nominations is Friday, April 1, 2022 at 5:00 p.m. All nominations must be made online, through the form link below. Nominees shall remain active in the candidate pool for three years, starting with the year of the original nomination. If you have questions about the nominating process, please contact Mrs. Oktoberfest 2018 Mary Mickelson